The community that sprang up around the diggings at Albany Flat was described by pioneer Cornelius Demarest as “one of the hot spots in early days.” The diggings soon played out however, and in 1856 only three miners, two merchants, and one hotel keeper were listed as the inhabitants: A.B. Anderson, miner, New York; F. Feige, miner, Maryland; L. Riley, merchant, New York; Thomas Rooney, hotel keeper, New York (probably the New York Hotel); L. Runyan, merchant, Illinois; W. Welch, miner, Ireland, although there were undoubtedly more who weren’t (Heckendorn 1856:99, 103).

In November of 1857 a correspondent for the San Andreas Independent visited Albany Flat and noted:

At Albany Flat, we found a few old subscribers “gone home,” and others gone to parts unknown, No news, no mining, and but little apparent energy in the place. One store, kept by an Italian (Andrew Lee & Co.), two or three families residing, in the best houses, were the only signs of life we noticed (San Andreas Independent, November 14, 1857).

And that same day:

We sallied out, threading the highways and by-ways, which led to Albany Flat. The falling leaves and forsaken gulches, empty cabins and uncultivated gardens—all bore a melancholy appearance, foreboding to the newspaper man—as visible as lettered inscription—“He who enters here, leave hope behind.” Sunken ditches and high flumes crossed the road at sundry points—but no water (San Andreas Independent, November 14, 1857).

The following year Albany Flat was described by a correspondent traveling from Marble Springs to Camp Senorita:

Next is Albany Flat—a place of no inconsiderable importance—but at present shockingly dull—many having removed their habitation, leaves gaps there and there, which gives to the Camp a very unpleasant appearance (San Andreas Independent, April 24, 1858).

In 1859 Albany Flat was described as deserted:

The writer and his two brothers were prospecting some claims at Albany Flat about two miles from Angels. This was one of the richest of placer diggings in the early days and at one time had a large population. At least it could boast of two hotels large enough to house one hundred and fifty persons each, but at this time the flat was almost entirely deserted. We squatted in one of the deserted hotels, named the New York judging from an old sign that was still nailed over the dilapidated outside door. We wandered through the deserted corridors, slept in the deserted chambers, and ate in its deserted dining room the meals which we had cooked in the deserted kitchen. We were monarchs of all we surveyed (Demarest 1977).

The following year the miners at Albany Flat were described as having done very little the past season, owing to the scarcity of water (San Andreas Independent, February 11, 1860).

With mining no longer of any importance, the lands in the area were taken up by agriculturalists, primarily Italians from Genoa, (i.e. Pierano, De Martini, Gazzola, Lertora, Figaro, Canepa, Foppiano, Bacigalupi, Romaggi, etc.). They planted vineyards and orchards, raised vegetables, a few cows, sheep, hogs, and poultry, and basically survived by subsistence farming. Over the years they intermarried with each other, worked a bit at mining on their own lands and in the nearby mines at Carson Hill and Angels Camp, and many of their descendants reside in the county today. 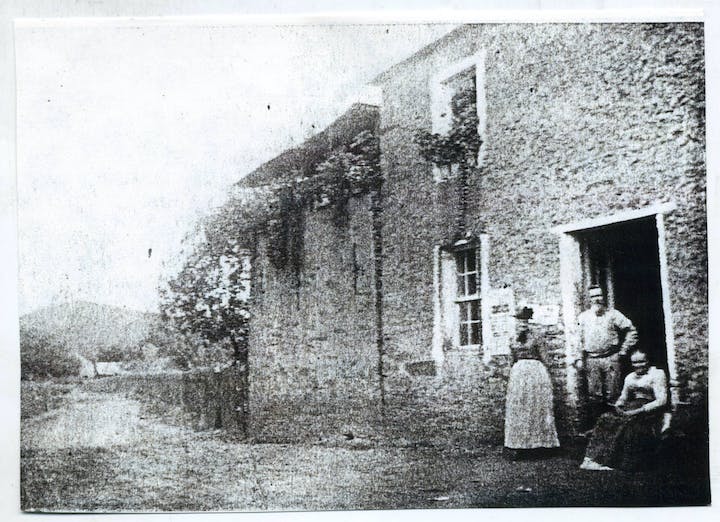