The California Gold Rush is identified as the greatest worldwide migration in peacetime history.  Within a few years, hundreds of thousands of hopeful miners and enterpreneurs poured into the Sierra Nevada foothills and then spread out across the landscape.  Although most returned to their homelands, many stayed to make new lives in this land of opportunity.

Calaveras, in the Southern Mines, had a more ethnically diverse population, and the county swarmed with representatives from throughout the globe. The first to arrive in 1848 were the Californios and the Mexicans, followed by those from the Pacific Rim as reports of gold spread via sailing ships. Following on their heels were the Forty-Niners from the Eastern States and Europe who had jumped aboard ships and launched overland treks in 1848 bound for California. This initial “rush” lasted for about a decade before the easy gold was exhausted and the dream of instant wealth dissolved. People, however, kept coming, with later migrations from Southern Europe adding more flavor to the Mother Lode stew.

Chileans and Mexicans arrived with considerable mining skills. The Chinese, a legendary group of hard-working miners, railroad builders, cooks, and ditch-diggers, composed 22 percent of the county population in 1860. The Anglo-Americans, the majority of inhabitants, had subgroups of English, Irish, Welsh, and Scots, as well as American Yankees, southerners, and “Pikers” from Missouri. Blacks, both slave and free, came to try their luck. Europeans in the early days included Germans, Jews, Swiss, French, Basque, Italians, and Eastern Europeans, as well as miners from New Zealand and Australia.

In towns and mining camps, these groups tended to gather with fellow nationals. Discrimination drove some apart, while others settled together for the camaraderie of familiar languages and customs. Towns teemed with restaurants, lodging houses, and bars catering to particular nationalities, and a babble of languages filled the streets. Some of these groups left descendents who remain today, and some left names on the landscape such as Chile Camp, Italian Gardens, China Gulch, Negro Hill, and French Camp. 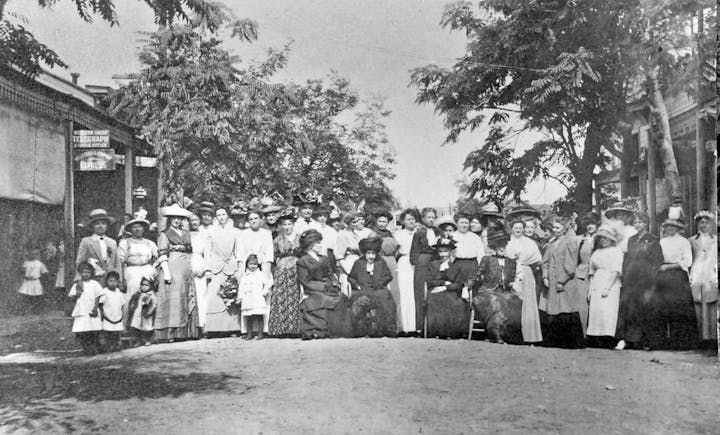 Through a grant from the National Endowment for the Humanities, the Calaveras Heritage Council commissioned a study of the population of Calaveras County from historian Dr. Joseph Giovinco.  Completed…