Sandy Gulch is located on State Highway 26 about half way between Glencoe and West Point, occupying a ridge that runs west from Railroad Flat Road between the Middle and South Forks of the Mokelumne River. A seasonal creek runs westerly through the rolling meadow, before turning north and descending steeply to the Middle Fork of the Mokelumne River. A half dozen springs provide water throughout the year. Sandy Gulch was the location of an important Native American village and, since the Gold Rush, has been associated with mining, water, trading, agriculture and timber.

While Sandy Gulch had its share of transient miners in the 1850s, a dozen families also immigrated to establish permanent homesteads. Large land holdings were developed into farms and ranches on the gentle slopes that were irrigated from the abundant springs and the Harris and Kadish ditches with their terminal channels. There were household gardens, an orchard, nursery, vineyard, black berries, hay and clover (J.A. Smith 1961; Calaveras County Assessments 1862, Herbert; Marvin 1983; McGreevy 2005c). Livestock included horses, oxen, hogs and chickens (Calaveras County Assessments, Herbert 1862). Lumber from the Harris lumber mill was sold from Mokelumne Hill to West Point to construct homes, shops and barns to store hay and shelter livestock in the winter (Calaveras County Assessments, Herbert 1862). The Harris barn still stands today in upper Sandy Gulch (Costello and McGreevy 2005a).

Both the mining and the agricultural sectors were supported by the business community that was located in downtown Sandy Gulch near the current Historic Landmark. Sandy Gulch Store was run by a succession of owners from in the 1850s and 1860s (Hinton Mayall & Co; M. Kadish, Joseph & John Musto and John Genochio; John Musto, B. Ozterano; and A. Herbert). A second store was owned by Carl Percival and later Brown and a third store was owned by A. W. Herbert. The shoemaker’s shop was run by Tommie Winthrop (Calaveras County Deed Book N, p. 423, 1866), the butcher shop by Brown and the saloon by Joseph Musto (J.A. Smith 1954b). There were at least two blacksmith shops (Calaveras County Assessments 1862; Costello and McGreevy 2005a, 2005b).

While the Anglo immigrants developed their thriving community in Sandy Gulch, the Mi-Wuk were displaced from these ancestral lands. They did have access to their sacred burial ground and continue to use it today. In addition they were allowed to build a roundhouse on the ridge above the Harris home (J.A. Smith 1961). However, the Mi-Wuk remained land-less until the Federal Bureau of Indian Affairs gave them a land trust in ca. 1920 south of West Point.

Sandy Gulch continued to be an agricultural and mercantile center until 1877 when the Mokelumne Hill – Campo Seco Canal and Mining Company diverted the water from the Harris Ditch at Mayflower to the Licking Fork (J.A. Smith 1961; Anonymous 1999). Today there is nothing left of the original Sandy Gulch except for the Bardsley Adobe dated 1853 (Costello & McGreevy 2005c), the 1850s cellar to the Sandy Gulch Store and the Harris barn, several rock lined wells and retaining walls (McGreevy 2005b), the Native American cemetery, and remnants the old water systems.

By Patrick B. McGreevy

Anonymous
1999 The History of the Calaveras Public Utility District, 68pp. 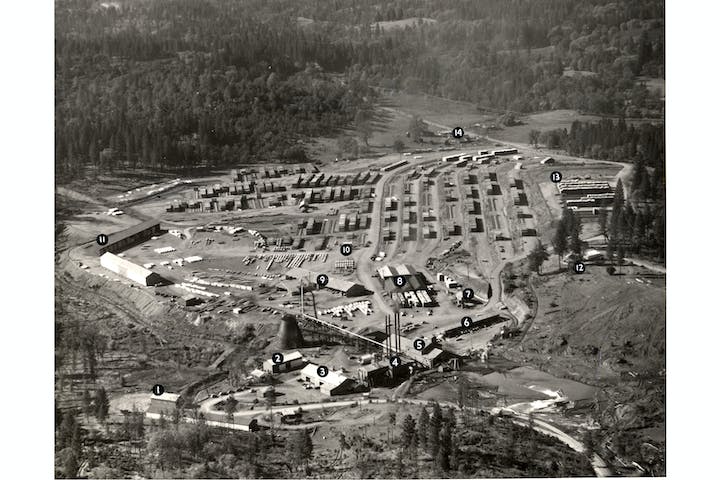 Wilseyville is a relative newcomer to Calaveras County, established in 1941 as a lumber town in the area known as Sandy Gulch. It was laid out by Howard Blagen for Associated Lumber and Box. Blagen… 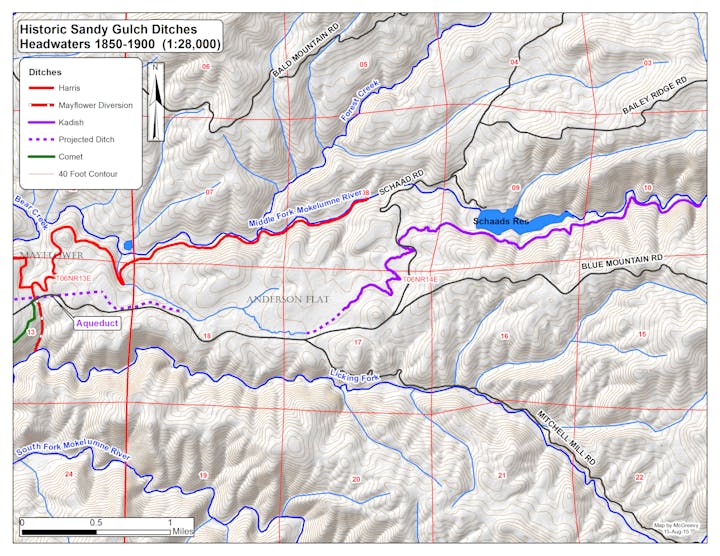 Both placer and lode mining depended on a supply of water.  During the initial years of the gold rush, placer claims followed the streams while ore mills were located at the bottom of steep canyons on…

In 1849, William and Dan Carsner found large nuggets of gold embedded in the coarse sands of an intermittent creek and the place became known as Sandy Gulch (State Historic Landmark 1941).  The…