The proto-historic is the period of European-Native American contact—the time between the prehistoric period with no written records, and the historic period when written records became common. This section presents a descriptive documentation of the Native American people and culture of the central Sierra Nevada and foothills, and on behavior that is remembered by living people—a branch of anthropological study known as ethnography.

The Mi-Wuk is the Native American group that was present in the central Sierra Nevada and foothills at the time of European contact. Their culture was documented by early explorers, settlers, and missionaries in dairies and mission records, and further studied in the 19th and early 20th centuries by ethnographers who spoke with Mi-Wuk descendents. The Mi-Wuk people today take a strong and active role in the study and documentation of their culture.

The Mi-Wuk traditionally occupied a large portion of the central Sierra Nevada range — generally, the watersheds between and including the Merced and Consumnes Rivers, the adjacent foothills, and a portion of the adjacent Sacramento-San Joaquin river valley 1 2. Anthropologists and linguists are not certain when the Mi-Wuk arrived in central California, or from where; the native people themselves believe that they were created on this land and have always been here. Heizer and Elsasser 3 (p. 10) list the Mi-Wuk as one of the “five Penutian nations”; that is, they all traditionally spoke languages of the Pen-Utian stock as first defined by Dixon and Kroeber 4 5. Linguistic studies suggest that the ancestral Mi-Wuk occupied the Sacramento-San Joaquin Delta area early-on, but did not arrive in the Sierran foothills and mountains until much more recently. Levy 6 (p.398) reports that the Western (Bay/Coast) and Eastern (Valley/Foothill/Mountain) Mi-Wuk languages separated some 2,500 years ago, and that the “internal time depth of Sierra Mi-Wuk is approximately 800 years.”

"Of Royal Indian blood, Princess Catherine Wilson, 98, who spent nearly a century in Calaveras County, was found dead beside a trail to her cabin Wednesday morning. When her familiar figure was not seen patiently plodding about her Happy Valley home where she was born, neighbors searched for her, to find her body slumped to the ground. A gentle rain was falling when searchers came upon her body… 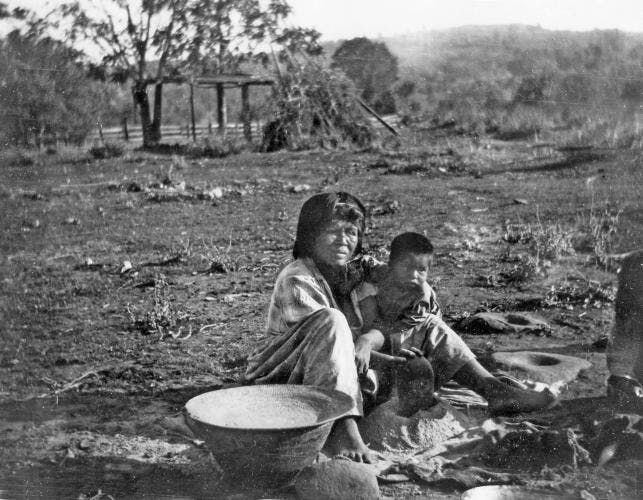 Regardless of when the Mi-Wuk arrived in central California, the first non-natives entering the area found a well-established society of hunters, fishermen, and plant-food gatherers whose territory stretched from the edge of the San Joaquin Valley to the high elevations of the Sierra Nevada. This wide topographic and vegetative range provided the native people with all manner of foods: antelope…