An overview history of Jesus Maria is accompanied by more specific histories of: the Milk Ranch owned by Hughes, Beffa, Dotta, Jelmini, and Gnecco families; the town’s stone and adobe stores owned by the Ratto, Lagomarsino, Molle, Gayon, Gnecco, and Cavanna families; the Gregoire Vineyard and Ranch; and the Plumb Ranch.

Gold was discovered along the banks of Jesus Maria Creek, a tributary of the Calaveras River, in the earliest days of the Gold Rush.  Jesus Maria, like many other Gold Rush era camps, soon had a reputation for lawlessness and was considered one of the area’s wildest, with fandango houses, saloons, and gambling establishments catering to the miners.  Numerous accounts of violence, robbery, fighting, and murders were recounted.

By the summer of 1852 the community had settled into a more peaceful existence, as a correspondent for the San Francisco Alta commented:

Jesus Maria – This place, which a short time ago was but an inconsiderable camp, consisting of a few scattered tents, presents now the appearance of a fine and flourishing village.  Large numbers of miners are daily arriving, and houses are springing up with surprising rapidity.  Hill diggings have been struck, and tunneling is carried on to a large extent.  We know of scarcely a single instance of a tunnel in operation there which is not paying something, while some are said to be remarkably rich. Very little is doing on the river, as the water is exceedingly high at present (San Francisco Alta, June 7, 1852).

The name was derived from a Mexican vegetable peddler who sold to miners in the early 1850s (Gudde 1975:177).  Although Jesus Maria had been living in the town since its establishment, very little is known about him other than assessments for property from 1856-1860, and the 1860 census when he was listed as a miner, from Mexico, aged 53.  In addition to a large population of Mexicans, the community included Chileans, French, Italians, Americans, and Chinese.  The other prominent name in town, Negro (Nigger) Gulch, was named for two black men who operated a saloon in Mokelumne Hill and mined in the gulch (Matzek 1987).  It refers to the gulch which courses uphill northeasterly from Jesus Maria to Whiskey Slide, a hard rock mining community about a mile away.

As was common in these early placer mining communities, once the easy gold was depleted, the population moved on to richer strikes elsewhere, often just walking away from their properties.  Most of the names in the earliest records were Hispanic, either Mexican or Chilean, but by 1854, many had departed without leaving any record of land transactions.   The community stabilized, however, as stores, butcher shops, saloons, liveries, blacksmiths, dairies, winery, hotels, restaurants, gardens, and farms were established.  The town cast 213 votes in the election of 1854.

By 1858-9, the population in the village peaked with 26 men assessed for businesses or houses in town and the Nigger Gulch School (soon changed to Negro Gulch School) had been established.  In addition to the businesses mentioned above, a “Milk Ranch” was operating, providing milk to Jesus Maria and vicinity, first by Christopher Hughes, and then by the Swiss Alexander Beffa and Giobatta Dotta; Elias Craig had opened a blacksmith shop; Bartolomeo Ruizzo was operating a confectionary, Eugene Jacob a butcher shop; James Carr a billiard saloon; Louis Rieffel a French bakery; Joseph Michel a butcher shop and clothing store; and four stores were selling groceries and dry goods:  Ratto & Lagomarsino’s Italian Store, Paulo Molle’s Italian Store, Juan Falco’s Store, and David Phillips Store.  Two Chinese were also assessed: Ah Chin for a Spanish horse and John Sing for a house and lot.  Most of the Chinese, however, resided in a community up a gulch southwest of town, along the road to the Fischer Ranch in Oak Flat (Hughes 2015).

Other assessed properties were not identified by use and could have simply been the homes of miners (Calaveras County Assessment Rolls, 1858, 1859).  Up Negro Gulch near town, Giobatta Falco was mining on the Mauna Ranch with water from his Falco Ditch.  Mining continued in Jesus Maria Creek and on its banks for several years, however, including Ratto and Lagomarsino and others.  East of town, Bartolomeo Ratto and Giovanni Batista (George) Lagomarsino purchased the Boston Flat Ranch (BF-7).

These enterprises continued in operation through February 1861, when a fire decimated most of the community.  The fire burned westward on both sides of the street, finally stopping at Falco’s stone store (the later Gnecco home).  With the easy gold recovered, many of the townspeople moved on to more successful diggings, including virtually all of the Mexican population.  Only one Chilean family, that of Manuel and Carmen Mauna, remained.

After the fire, only 14 properties were assessed; one was Alfred Norton’s Saloon, occupied by Hooper as a billiard saloon.  A New Yorker, Norton was serving as Justice of the Peace, law and order having come to Jesus Maria.  Thomas Tanner had taken over the Hotel de France, but there was no longer an assessment for it after 1865.  Elias Craig was blacksmithing (southeast of Ctx. 214); Mandis was operating his saloon, selling it to Gayon by 1865; the Falco, Gayon, Molle, and Ratto stores were operating; Beffa was dairying at the Milk Ranch; and Manuel Mauna mining and residing on a ranch on Negro Gulch.  Martin and Catherine Fischer had moved their butchering operation to Oak Flat, about a mile south of Jesus Maria.

As the 1860s wore on, more and more gardeners and farmers settled in the community, taking over the mining ditches from Jesus Maria Creek, Esperanza Creek, and Wet Gulch to irrigate their lands.  Among those who arrived in those years were Joseph and Catherine Costa who had a ranch on the south side of Jesus Maria Creek below town; Stefano and Maria Cavanna, also across the creek below town; J.S. Stevens and Olivia Jacinto who had small farms on the creek one-quarter mile above town; miner Orrin Plumb  who farmed in the creek below his house and barn on the north side of Jesus Maria Road on the east end of town; and several folk who were noted as having small gardens, including Elias Craig, John Estuela, Manuel Mauna, and Francisco Gnecco.  Several ranchers also settled at Whiskey Slide about this time.

Farmers grew vegetables, potatoes, fruit, and raised livestock, including cattle, hogs, and sheep, while others grew grapes and made wine and brandy.  The most long lasting agricultural enterprise in town was the vineyard and winery of Dauphine/Gregoire/Gnecco.  The vineyard was located near Jesus Maria, running northerly “along the Jesus Maria to Whiskey Slide Road about one mile to a post marked D.F., east about 100 rods, bounded south by Plumb’s fence, about 100 rods to Boston Flat Road, along Boston Flat Road to beginning” (Deed Book B:409).

Two years later James and Elisa Lancell Gregoire deeded the property to Eugene Jacob, acting in company with John Deforse, for $200.  The deed included a ditch conveying water from Jesus Maria Creek to a garden on the south bank of the creek, and a house, barn, and fence.  In 1873-4, Francisco Gnecco was assessed for Gregoire’s Vineyard, located back of Gregoire’s house.  By 1876 he was also assessed for 1000 gallons of wine and 50 gallons of brandy, evidently continuing the French winemaking tradition.  From 1875 thereon, Gregoire’s Vineyard was assessed to John Gnecco, who had taken over his father’s properties.  Over the ensuing years the vineyard was noted as 10 acres, 18 acres, and eventually three acres by the 1930s.

Whatever the size of the vineyard, John Gnecco had the most enduring and successful business in Jesus Maria.  His wife Louisa (Lagomarsino) was known for her hospitality, serving teamsters and travelers from their home on the north side of Main Street in the west end of town.  She also grew melons, alfalfa, sugar beets for cattle, and made cheese from milk.  In addition, the family raised cattle, taking them to Jelmini Basin and Bear Trap in Alpine County during the summer months after they acquired the Jelmini properties in 1910.  John grew vegetables, distilled grappa, made wine and brandy, and, during the Depression, his son Frank was recalled as having “made whiskey and made money” (Hughes 2015).

As was common in areas in Calaveras County that were distant from established townsites, once the government surveys were completed in the early 1870s, all claimants in town allowed a prominent landowner, usually a merchant, to patent the land, then deed the properties back to them, thus providing legal title. This occurred in Jesus Maria with merchant Francisco Gnecco.  On April 10, 1875, Gnecco patented the lands within the townsite, deeding individual properties back to the original owners.  In 1877, Francisco moved back to Italy and deeded his Jesus Maria properties to his son Giovanni Batista (John), who continued the tradition.  When people moved away, many of them sold their properties to the Gneccos as well.

A few stores, a butcher shop, dairy, saloon, blacksmith, vineyard, farms and ranches survived into the mid-1870s, but by the 1880s only a handful of properties in the village were extant.  By that time, Joseph Gayon was still selling wine and groceries, Stefano Cavanna and family were farming, Gnecco was making wine and brandy, Paul Lancell was operating the old Jacob butcher shop in Falco’s old store, the Maunas were operating a saloon in town, and Jelmini was running cows and cattle.  Up at Camp Whiskey Slide, the Phillips family had settled near the Hughes, Moffitt, and Wilhelm ranching families, where the Negro Gulch School was established in 1858.

By 1894, the only folk in town were John and Louisa Gnecco residing in the old Falco store, adapted into a fine two-story house ner  the center of town. Also in residence were Gaetano and Johanna Jelmini on the west end of town; Bartolo Cavanna owning the old Ratto Italian Store, and residing with his mother Mary in Gayon’s old adobe store; Manuel and Carmen Mauna on the north side of Main Street; and Orrin Plumb’s sons on his ranch.  Agostino Lagomarsino had taken over his brother’s ranch at Boston Flat and was residing there with his daughter, Celestina Giuffra, and her family.

The Gneco home burned in 1898, but they soon built a new one-story house a bit west, south of Molle’s old adobe store (Ctx. 207) .  In 1907, only the Cavannas, Maunas, Gneccos, and Johanna Jelmini were assessed in town.  The widowed Celestina Giuffra had purchased the Plumb ranch, but was residing in her Boston Flat Ranch.  By 1918, only the Cavanna stone and adobe buildings and Gnecco home were assessed.  The second Gnecco home burned in 1936, and a newspaper reporter commented, “since this latest fire, there remains on the historical old townsite of Jesus Maria only one building to attest to the affluence of the town in the boon ‘50s, a stone and adobe structure (actually two structures), known as the old Cavanna house” (Calaveras Prospect, January 18, 1936.  In 1947 Willard Hughes, whose ancestors had once owned the first livery and dairy ranch in town, purchased the townsite from Frank Gnecco.

Of the 1850s’ buildings, only three were to last until the 20th century:  Ratto & Co. stone store, Joseph Gayon’s adobe store, and Paulo Molle’s adobe store; the stone store of Giovanni Falco -- subsumed into the Gnecco home by the 1880s -- was demolished when it burned in 1898.  The other early buildings in town were of frame construction, and either burned, were torn down, or collapsed over the ensuing years.  The only remaining standing building, Molle’s ca.1854 adobe– later known as the Gnecco Winery – was destroyed in the 2015 Butte Fire. 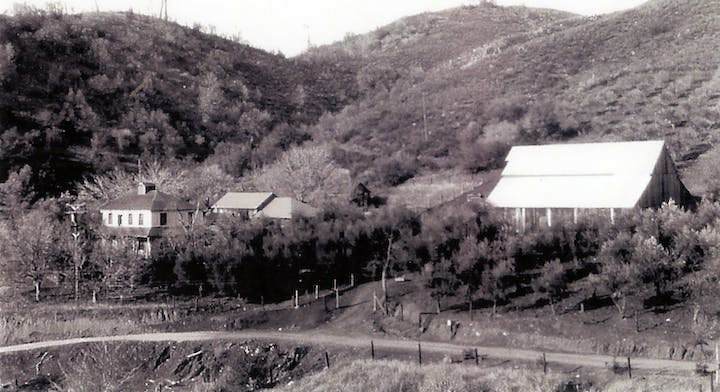 The ranch established at the gold-rush location known as Boston Flat was first recorded by a series of Yankees before being deeded to a succession of Italian families: Ratto, Lagomarsino, Guiffra, and… 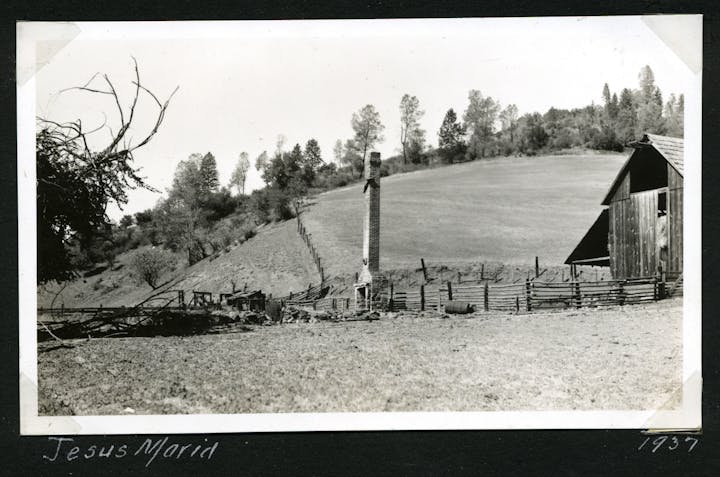 The ranch at the north end of Jesus Maria was owned over time by the Hughes, Beffa, Dotta, Jelmini, and then Gnecco families. 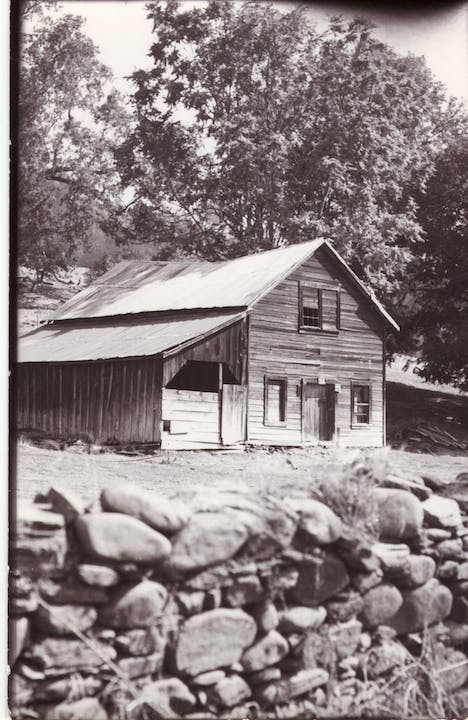 Orrin Plumb, born in Connecticut about 1820, evidently arrived in California in the early years of the Gold Rush, as in 1852, he and two others constructed a mining ditch from Wet Gulch to Boston Flat…