The historically and architecturally significant buildings in Calaveras are diverse in style, as well as in method and period of construction. They are built of adobe, stone, brick, wood, or concrete and have sidings of brick, wood, stucco, and plaster. The architectural styles represented are Neoclassical, Greek Revival, Gothic Revival, Italianate, Queen Anne, Eastlake, Mission Revival, False-front commercial, Craftsman, Spanish Eclectic, Tudor Revival, Art Moderne, and various vernacular adaptations of all.

The first dwellings were the brush houses of the Mexicans and canvas tents of the miners, followed by the adobe homes and business establishments of the Sonorans (from the Mexican State of Sonora). Soon, however, more permanent wood structures were built, with the first frame houses constructed in the simple one-story vernacular Greek Revival or National Folk style. Commercial buildings were usually built close together on both sides of the main streets, one or two stories high, with gable roofs, front porches, and French doors. Fires and damage from earthquakes (and floods) destroyed many of the structures and buildings of those early days, and those that were not damaged through such actions were later razed in the name of “progress,” were inundated by reservoirs, abandoned and forgotten, or otherwise decreased in importance as settlements.

After many towns were destroyed by fires, the scourge of the Mother Lode in the early days, more affluent merchants began to rebuild in the more permanent brick or stone. Although many Americans built of stone, it was the Italian and French stonemasons, so experienced with this method of construction in their homelands, who built the majority of the lasting stone structures in the California foothills. They built commercial establishments, residences, basements, storehouses, outbuildings, ovens, walls, corrals, ditches, and numerous other structures with the abundant local schists, slates, marbles, and andesites.

As the camps became communities and women and children moved west to be with their menfolk, the appearance of the towns changed. Back streets were lined with one and two-story frame houses, picket fences delineated planted yards and gardens, and churches, schools, and social halls were constructed, usually in a simple Greek Revival style. Farmhouses dotted the landscape, surrounded by their attendant barns, bunkhouses, blacksmith shops, sheds, corrals, creameries, and springhouses.

Within a few scant years after the gold discovery sawmills had been established, initially to provide lumber for the flumes, timbers, and mills for the mining industry, but they provided materials for residential and commercial construction as well.  After the first sawmill was erected, builders began to utilize the local redwood for simple frame one-story gabled “homestead” residences.  As sawn lumber and nails became more readily available in the late 1850s and 1860s, houses became larger to accommodate families and were built in the National Folk or Vernacular Greek Revival styles (McAlester & McAlester 1984:88-101, 178-195).

Although adobe buildings were fairly common in the communities in the Southern Mines, especially in Sonora in Tuolumne County, Calaveritas and Mokelumne Hill in Calaveras County, and anywhere else Mexicans resided, only one adobe home was identified in Angels Camp.  Dr. J.T. Boon(e)’s residence, on the northwest corner of Main and Hardscrabble streets, was built of adobe in the early 1850s (Kuchel & Dresel 1857), but was demolished some years later after it deteriorated.

The first frame homes built were simple one-story vernacular Neoclassical dwellings, sometimes referred to as California Rustic.  These ubiquitous homes, which were built in cities and on ranches alike, exhibited the basic symmetry of that style, with gable roofs, horizontal siding, surrounding porches, and central entryways flanked by multi-paned windows.  They usually had four rooms in the main portion of the house, with a shed-roofed kitchen attached to the rear.  This style remained one of the most popular in Angels Camp from the Gold Rush to the early 1900s, with but a few variants such as more or less-steeply pitched rooflines, larger structures, and differing architectural decoration.

A correspondent in May of 1858 described the early commercial establishments:

They are increasing the numbers of stone buildings.  They are built of an igneous rock, heavier than the lava of Mok. Hill, but not so dark or solid as basalt.  It makes a fine looking building, works readily under the hammer, and is impervious to fire as a salamander.  Angels wears a sober, business aspect, and from the depths of her immense quartz veins promises a solid growth and great enlargement (San Andreas Independent, May 1, 1858).

When Bayard Taylor returned to California in 1859, a decade after his first visit, he described the typical mining village in the Southern Mines:

In their structure, these mining villages are very similar.  The houses are built close against each other, as in a large city.  The most of them are of wood, and one story in height.  Here and there, you see a block of brick stores, two stories high, flat-roofed, and with iron doors and shutters, as a protection against fire.  There are plank sidewalks, and very often the streets are planked, also.  Awnings keep off the hot sun, and verandas are introduced wherever it is practicable.  Behind the main street are clusters of shanties inhabited by the miners—small, dusty, barren of ornament, and usually standing alone, with a rough oven of stones and clay adjoining.  On the outskirts of these are the still more rude and repulsive dwellings of the Chinese….There are usually  one hotel, one small church, a theatre of rough boards, and five-and-twenty dram shops to a place.  On pleasant locations in the vicinity, are the comfortable residences and gardens of the successful traders, the owners of “leads,” or quartz mills, and the holders of office (Taylor 1951:107).

At first homes were built by their owners, but professional carpenters soon arrived in the area.  By the 1870s the prosperity of businesses and farms began to be reflected in more elaborate local architectural styles and Angels Camp was well-developed, with commercial establishments along Main Street, and residences on the secondary streets.  Hotels, restaurants, and saloons were established to cater to the travelers along the main route to the outlying mines and over the Sierra passes.  Businesses such as slaughterhouses, lumber mills, and lime kilns settled in the outlying areas.  Farms and ranches were dotted throughout the arable land surrounding the community, usually of 160 acres or more.

During the 1880s and 1890s Second Gold Rush, numerous false-front commercial establishments, as well as Italianate, Eastlake, and Queen Anne residences were constructed.

The Queen Anne style, popular in California in the late 1880s, 1890s, and early 1900s, with its asymmetrical facades, hipped and cross-gabled roofs, and decorative shingles in the gables, porches supported by turned and bracketed posts, and spindlework, was utilized both for the large mansions of the commercial barons as well as for hundreds of small homes and farms throughout the county.  Most of these cottages were copies of Eastern architectural styles, with many built from pattern books or kits.  Though relatively small, the homes were embellished with verandas, circular bays, multi-gabled roofs, decorative shingles and millwork, and other characteristic features. Several homes were built by successful merchants, and numerous small dwellings were constructed by more modest homeowners.  Pattern books, which enabled any housebuilder to construct a modern, sophisticated dwelling, were used extensively throughout the area.

By the turn of the 19th century, the population had stabilized and many new Transitional style homes, displaying the influences of both Queen Anne and the Bungalow style to follow, were erected.  This style, while involving less ornamentation, still utilized such features as oversized gables and decorative shingles.  This style indicated a movement toward a more subdued approach, and between 1900 and 1925, the California Bungalow and Craftsman Bungalow styles became the characteristic styles of the region.  Both provided housing for the middle-class, and involved an effort to integrate indoor and outdoor living spaces with the use of sleeping porches, natural wood, and less formal gardens.  The more prevalent Craftsman homes, with their broad-based pillars, overhanging eaves, exposed purlins, and knee braces, had more prominent design features than the simpler bungalow.

In the period following World War I, numerous Craftsman bungalows were constructed in communities and on ranches alike.  Most of them appear to have been built by local carpenters from style books produced by architects such as Greene and Greene, Gustav Stickley, and many others.  The Craftsman style, the most popular residential style in America between 1905 and 1920, was an outgrowth of the Arts and Crafts movement, begun in nineteenth-century England by John Ruskin and William Morris.  The ideal was the union of the fine and decorative arts, using the natural form of what was shaped by human needs by individual craftsmanship to constitute real beauty in art, furniture, or architecture.  Based upon the idea that a human habitation should harmonize with its surroundings, as well as with life indoors, made California, with its moderate climate, the perfect location for the establishment of the style.  The Craftsman idea was broad enough to include farmhouses, suburban houses, mountain cabins, and commercial buildings, but by far its greatest application was for residential "bungalows."

Usually designed as single-story houses with well-ventilated rooms, the Craftsman houses always had a porch, and often two or more.  Ceilings were usually low, windows abundant, and halls, stairways and passageways avoided.  Ornamentation was kept to a minimum and consisted primarily of elements derived from California Mission architecture or from the Arts and Crafts movement itself.

During the late 1920s and 1930s, a romantic nostalgia for the Hispanic culture culminated in the Mission Revival and Spanish Eclectic styles, both in commercial and residential architecture. .  Built of brick or stucco, with colonnades, arches, pillars, tile roofs, decorative tilework, flooring, and metalwork, these buildings supplanted the bungalows as affordable housing throughout California and the foothills.  The style was also used extensively for commercial buildings, hotels, railway stations, and public buildings.  The immense popularity of the style, coupled with a period of economic development in the county, spurred many property owners to cover the facades of their original buildings with stucco in the Spanish Eclectic style.

The Art Moderne, or Art Deco, style was common in the 1930s.  Its use of yellow firebrick (though not in Angels Camp), often with decorative colored tiles, is prevalent, as are smooth stucco surfaces with various elements of horizontal and vertical grooves, zigzags, chevrons, and other stylized geometric motifs as decorative elements on the facade.  Several of the storefront wainscotings were decorated with ceramic tile in bright colors.  Most of the storefront entryways from this period are recessed, some with tile floors, and often replaced earlier wooden entryways.  It was at this time also that the flat facades of the stone buildings, with their French doors and iron shutters, were replaced with recessed entryways and storefront windows.

Most of the residences and commercial establishments in the county were built by local carpenters and builders and in later years from pattern books and style guides, and not as high examples of any particular style. In most instances they were vernacular adaptations that do not conform to pure academic categories, commonly combining elements from several different design types or historical periods. However, no matter how ambiguous these vernacular buildings may appear in terms of style, they are, nonetheless, accurate reflections of the tastes at the time of their construction as well as an important indication of the building techniques and materials of their day, with a compatibility not often found in major cities and commercial centers. 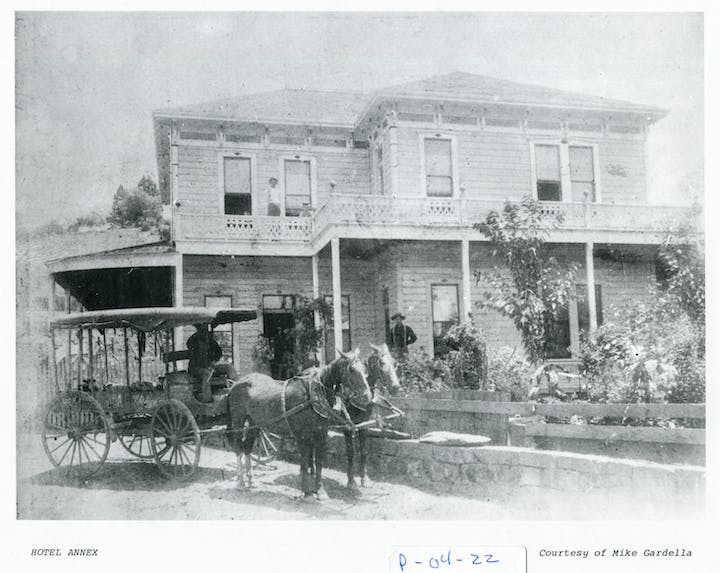 Communities enact design review to protect their historic and cultural assets.  Design review guidelines identify important features of the community that should be respected, while refraining from…